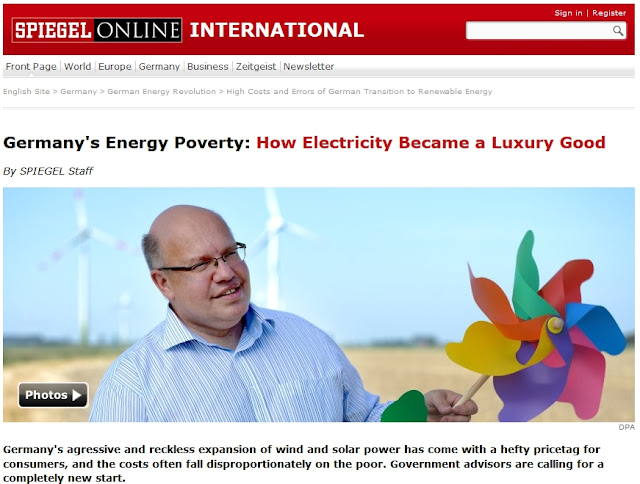 
Germany's agressive and reckless expansion of wind and solar power has come with a hefty pricetag for consumers, and the costs often fall disproportionately on the poor. Government advisors are calling for a completely new start.

The government predicts that the renewable energy surcharge added to every consumer's electricity bill will increase from 5.3 cents today to between 6.2 and 6.5 cents per kilowatt hour -- a 20-percent price hike.

German consumers already pay the highest electricity prices in Europe. But because the government is failing to get the costs of its new energy policy under control, rising prices are already on the horizon. Electricity is becoming a luxury good in Germany, and one of the country's most important future-oriented projects is acutely at risk.

After the Fukushima nuclear accident in Japan two and a half years ago, Merkel quickly decided to begin phasing out nuclear power and lead the country into the age of wind and solar. But now many Germans are realizing the coalition government of Merkel's CDU and the pro-business Free Democrats (FDP) is unable to cope with this shift. Of course, this doesn't mean that the public has any more confidence in a potential alliance of the center-left Social Democrats (SPD) and the Greens. The political world is wedged between the green-energy lobby, masquerading as saviors of the world, and the established electric utilities, with their dire warnings of chaotic supply problems and job losses.

Even well-informed citizens can no longer keep track of all the additional costs being imposed on them. According to government sources, the surcharge to finance the power grids will increase by 0.2 to 0.4 cents per kilowatt hour next year. On top of that, consumers pay a host of taxes, surcharges and fees that would make any consumer's head spin.

Former Environment Minister Jürgen Tritten of the Green Party once claimed that switching Germany to renewable energy wasn't going to cost citizens more than one scoop of ice cream. Today his successor Altmaier admits consumers are paying enough to "eat everything on the ice cream menu."

For society as a whole, the costs have reached levels comparable only to the euro-zone bailouts. This year, German consumers will be forced to pay €20 billion ($26 billion) for electricity from solar, wind and biogas plants -- electricity with a market price of just over €3 billion. Even the figure of €20 billion is disputable if you include all the unintended costs and collateral damage associated with the project. Solar panels and wind turbines at times generate huge amounts of electricity, and sometimes none at all. Depending on the weather and the time of day, the country can face absurd states of energy surplus or deficit.

If there is too much power coming from the grid, wind turbines have to be shut down. Nevertheless, consumers are still paying for the "phantom electricity" the turbines are theoretically generating. Occasionally, Germany has to pay fees to dump already subsidized green energy, creating what experts refer to as "negative electricity prices."

On the other hand, when the wind suddenly stops blowing, and in particular during the cold season, supply becomes scarce. That's when heavy oil and coal power plants have to be fired up to close the gap, which is why Germany's energy producers in 2012 actually released more climate-damaging carbon dioxide into the atmosphere than in 2011.

If there is still an electricity shortfall, energy-hungry plants like the ArcelorMittal steel mill in Hamburg are sometimes asked to shut down production to protect the grid. Of course, ordinary electricity customers are then expected to pay for the compensation these businesses are entitled to for lost profits.

The government has high hopes for the expansion of offshore wind farms. But the construction sites are in a state of chaos: Wind turbines off the North Sea island of Borkum are currently rotating without being connected to the grid. The connection cable will probably not be finished until next year. In the meantime, the turbines are being run with diesel fuel to prevent them from rusting.

When Stefan Becker of the Berlin office of the Catholic charity Caritas makes a house call, he likes to bring along a few energy-saving bulbs. Many residents still use old light bulbs, which consume a lot of electricity but are cheaper than newer bulbs. "People here have to decide between spending money on an expensive energy-saving bulb or a hot meal," says Becker. In other words, saving energy is well and good -- but only if people can afford it.

A family Becker recently visited is a case in point. They live in a dark, ground-floor apartment in Berlin's Neukölln neighborhood. On a sunny summer day, the two children inside had to keep the lights on -- which drives up the electricity bill, even if the family is using energy-saving bulbs.
Becker wants to prevent his clients from having their electricity shut off for not paying their bill. After sending out a few warning notices, the power company typically sends someone to the apartment to shut off the power -- leaving the customers with no functioning refrigerator, stove or bathroom fan. Unless they happen to have a camping stove, they can't even boil water for a cup of tea. It's like living in the Stone Age.

Once the power has been shut off, it's difficult to have it switched on again. Customers have to negotiate a payment plan, and are also charged a reconnection fee of up to €100. "When people get their late payment notices in the spring, our phones start ringing," says Becker.

In the near future, an average three-person household will spend about €90 a month for electricity. That's about twice as much as in 2000.

Two-thirds of the price increase is due to new government fees, surcharges and taxes. But despite those price hikes, government pensions and social welfare payments have not been adjusted. As a result, every new fee becomes a threat to low-income consumers.

Consumer advocates and aid organizations say the breaking point has already been reached. Today, more than 300,000 households a year are seeing their power shut off because of unpaid bills. Caritas and other charity groups call it "energy poverty."

Lawmakers, on the other hand, have largely ignored the phenomenon. In the concluding legislative period, the government and opposition argued passionately over a €5 increase in payments to the long-term unemployed. But no one paid much attention to the fact that those welfare recipients would subsequently see the extra €5 wiped out by higher electricity bills.

It is only gradually becoming apparent how the renewable energy subsidies redistribute money from the poor to the more affluent, like when someone living in small rental apartment subsidizes a homeowner's roof-mounted solar panels through his electricity bill. The SPD, which sees itself as the party of the working class, long ignored this regressive aspect of the system. The Greens, the party of higher earners, continue to do so.

Germany's renewable energy policy is particularly unfair with respect to the economy. About 2,300 businesses have managed to largely exempt themselves from the green energy surcharge by claiming, often with little justification, that they face tough international competition. Companies with less lobbying power, however, are required to pay the surcharge.

Germany's largest energy provider, Düsseldorf-based E.on AG, has been operating a large coal-fired power plant in Grosskotzenburg for many years. The oldest of the five units at the Staudinger plant was built in 1965 and operates at a ridiculous 32-percent efficiency level. Even at E.on, the Staudinger plant is now seen as "completely unacceptable, both economically and environmentally."

State-of-the-art gas-fired power plants, like the one in the Bavarian town of Irsching, operate at almost double the efficiency levels of coal plants, or about 60 percent. They are also more flexible and emit far less carbon dioxide. This may explain why E.on officials were not particularly upset when the operating license for the oldest of Staudinger's five units expired on Jan. 1 of this year.

"To be on the safe side, we informed the relevant authorities several times that we are shutting down the unit," says E.on CEO Johannes Teyssen. When regulators did not object, the company began in May to dismantle key components of the power plant and transfer employees to other sites. E.on had planned to complete the work by the end of the year and remove what was left of the ancient plant.

But the situation suddenly changed on June 30, when E.on received a letter from the grid operator associated with the plant, Tennet, and the regulatory agency. The unit, the letter read, was needed to maintain grid stability, and E.on was to reestablish the coal plant's operational readiness without delay.

This is one of the most curious developments in the story of German energy reform. The country's most heavily polluting plants are now also its most profitable: old and irrelevant brown coal power stations. Many of the plants are now running at full capacity. (σ.σ. ακόμα και τα παλιά εργοστάσια που λειτουργούν με κάρβουνο είναι πιο αποδοτικά από την "πράσινη ενέργεια"!!!)